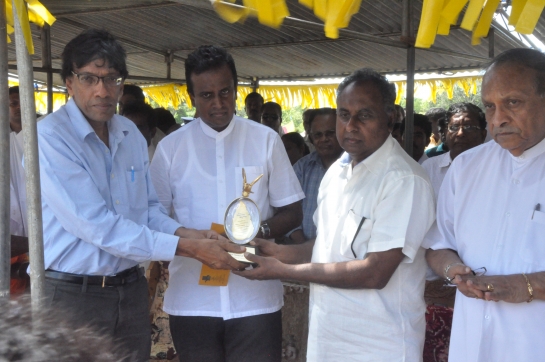 The Citizens Peace Award for 2015 was posthumously granted to the Ven. Maduluwawe Sobitha Thero for his fearless approach to minority rights and inter religious coexistence, and for providing skilful leadership in promoting humane values and democratic governance.

The Ven. Sobitha agreed to accept the award during his lifetime. The date of the award ceremony was set with his consent for November 5, 2015, but by that time he had fallen seriously ill.

The presentation of the award took place in Alapathgama at a ceremony presided over by the Speaker of Parliament, Karu Jayasuriya. Professor Sarath Wijesooriya, who heads the Movement for Social Justice that the late monk led, accepted the trophy on his behalf.

NPC’s Executive Director Dr Jehan Perera affirmed NPC’s commitment to work along with the National Movement for Social Justice to make the values and concepts of good governance, inter religious pluralism and human rights reverberate throughout the country and most of all in the hearts and minds of its citizens.