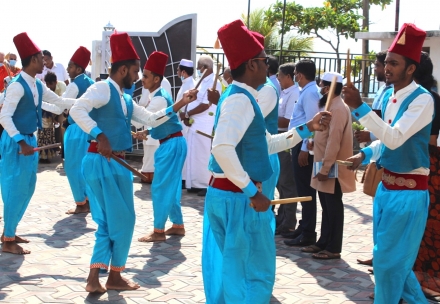 The religious leaders visited Batticaloa and Addalachenai to share learnings, recommend good practices and facilitate dialogue on religious teachings and interfaith coexistence. They went to places of religious worship including mosques, temples and churches, and discussed pluralism and coexistence through reflections of historical incidents to create broader understanding.

A seminar was held in Kattankudy with the participation of religious leaders, state officials, police officers and community leaders of the Addalachenai and Batticaloa LIRCs where participants shared their experiences in planning, designing and implementing committee interventions to promote interfaith coexistence and religious freedom. Religious leaders said that it was the first time they had participated in an event where leaders of all faiths interacted with each, which helped them understand that at the core of every religion there is peace and harmony.

Also under the CERF project, training programmes on gender were conducted for the members of the Akurana and Weligama LIRCs conducted by Mr. Velusamy Weerasingham, aimed at improving gender consciousness and sensitization among LIRC members to create the space for inclusive participation and decision making, both within and outside the committee. The training covered concepts including the differentiation between gender and sex, the concept of masculinity and femininity, gender mainstreaming and gender in peacebuilding and decision making.

“We need to take a long, hard look at the situation pertaining to gender equality and inclusivity. It is unfortunate that we have become insensitive towards equal treatment of all genders. We must take action to create the inclusive future we seek where all are treated with the dignity and respect they deserve,” said Mohammed Munzir Moulavi.