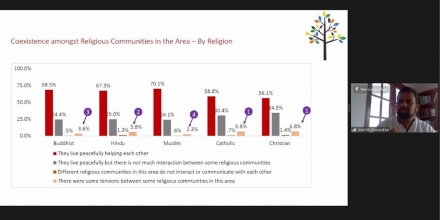 Two online sessions on the findings of the survey on religious freedom were conducted under NPC’s Collective Engagement for Religious Freedom (CERF) project for the Trincomalee, Batticaloa, Panduwasnuwara and Kuliyapitiya Local Inter Religious Committees (LIRCs) with the participation of more than 50 members.

The survey was conducted across 25 districts among religious clergy, state officials, police and community leaders. It examined how the participants who belonged to different religious
communities felt about freedom of religion in the country and how their own religion was practiced.

Mr. Shashik Silva, who facilitated the two discussions, explained the scientific basis of the research and shared the key findings of the survey that included:

“Integration must happen organically. It should not be done to pursue political motives and achieve partisan agendas. Unfortunately, the latter is prevalent in the Eastern province, which is corroborated by the findings of the survey. Political actors use forced settlement of Muslim families in predominantly Tamil areas to increase land ownership. This has created friction among ethno-religious communities,” said Father Rohan from Batticaloa LIRC.

“Ownership of land belonging to religious places has created tension among Buddhist and Muslim communities. Some residential areas where Muslims reside are now claimed as property of temples upon the argument that they hold archaeological value. The state must intervene to solve this issue as failure to do so will result in the escalation of the issue and could even lead to violence,” said Moulavi Rafil from Trincomalee LIRC.

“May 19 is considered as a victory day in the South while in the North May 18 is considered as a day of mourning. Until we find the will to come together, our differences will be the excuse for us to distance ourselves. The LIRCs provide a solid platform where we can interact, empathise and learn from each other. Hence, I encourage you to make the most out of this valuable opportunity and contribute your utmost towards creating the shared future that we all desire,” said NPC Executive Director Dr. Jehan Perera.