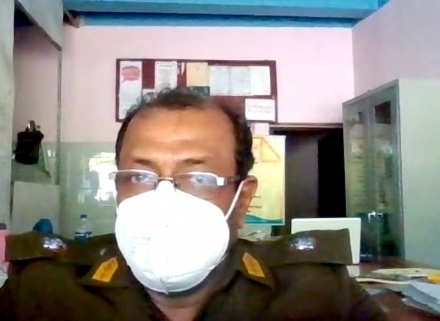 Participants were equipped with knowledge that would help them to conduct a survey on perceptions of hate speech this year with 240 samples in 12 districts. The objective of the survey is for the person to collect data on hate speech at the ground level using the person’s expert view.

The training programme began with an introduction from NPC Programme Advisor Sumadhu Weerawarne, who spoke on the social and legal background of hate speech and the purpose of the survey. She explained that hate speech was often used as a precursor to violent action. It created a narrative against the targeted community to justify violence.

Mr. Shashik Silva, a survey researcher and quantitative analyst, conducted sessions on research, survey and questionnaire development. He emphasised that the research should be conducted independently and that enumerators should be unbiased and not be advocates. He mentioned that the objective of social science surveys was to check the behaviour, expectations, knowledge and attitudes of people.

On the second day Mr. Mark Schubert, a survey researcher and quantitative analyst, explained the methods of implementing a questionnaire in the field, differences between advocacy and research and guidelines for conducting research.

Also under the project, an online training programme on the prevention of hate speech was held for participants from Batticaloa and Jaffna. Professor Kalinga Tudor Silva, former Dean and Senior Professor of the University of Peradeniya, explained the sociological background of hate speech. It was followed by a session on defining hate speech and the application of international standards in Sri Lanka. On the second day, a session was conducted on media literacy and mindful social media engagement on hate speech by Mr. Benislos Thushan from Hashtag Generation.

Two training programmes on prevention of hate speech were also conducted by master trainers for youth leaders in Kegalle and Kurunegala. Participants were made aware of the sociological
framework of hate speech, hate speech laws, media literacy and mindful social media engagement.

Also under the same project, a training programme on conflict management and analysis was conducted by master trainers for religious leaders in Kurunegala, focussing on basic human needs and identity.

Participants analysed conflicts in their communities using the four tools of the conflict tree, conflict mapping, the conflict layer model and timeline. They were made aware of their roles and
responsibilities in building a pluralistic and peaceful society. Other topics discussed included minority religious rights, facilitating dialogue between communities, gender rights and the political will to bring about sustainable peace.

A Public Health Inspector from Kurunegala attended the Kurunegala trainings and spoke on the guidelines that ought to be followed in order to prevent the spread of Covid-19.