Countering Hate Speech in All its Forms 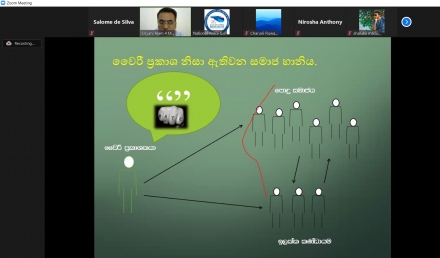 An online workshop on countering hate speech for youth in Polonnaruwa was conducted by NPC’s Technical Assistance to Justice Institutions in Sri Lanka project. Project coordinator Nirosha Anthony spoke on the social background of hate speech and the objectives of the workshop. She explained that hate speech is often used in society to create an enemy of the other while consolidating one’s own group. Modern technology and social media made this task easier and more harmful.

“Expressions of hate speech do not occur in only in instances of ethnic and religious conflicts. When people are demeaned and labelled with names for being short (‘kota’) and wearing glasses (‘pottaya’), that is hate speech as well,” she pointed out. A master trainer from Polonnaruwa explained the sociological frame work. “Nowadays there is a rapid spread of hate speech in society due to prejudice, ignorance, misconceptions, fear, suspicion and selfish motives,” he said.

He spoke about the Rwandan genocide, saying how on the radio and in newspapers the majority Hutus urged people to &quot;weed out the cockroaches&quot; meaning kill the minority Tutsis. Some 800,000 Tutsis and moderate Hutus were killed as a result. This was an example of creating a false and hateful narrative that would justify violence.

Another master trainer from Polonnaruwa spoke on the legal framework of hate speech, application of international standards, media literacy and mindful social media engagement on hate speech. She observed that during the past few days, there were Sri Lankan memes on the Israel-Palestine conflict. She explained that this was an expression of hate speech against Muslims and Christians in Sri Lanka.

“Most people spread hate speech because they do not know that people can take legal action against them. Creating awareness of the legal framework on hate speech would be an effective measure to counter hate speech,” a participant observed. Another participant added that infographics on hate speech laws should be shared on social media to create awareness.