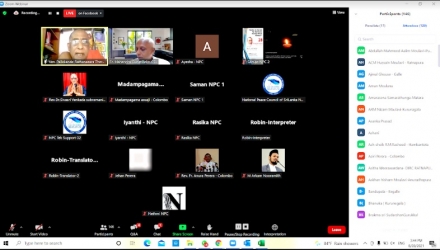 The leaders were divided into five groups to share basic concepts of each religion. A Buddhist monk pointed out, “According to Buddhism, humans should disregard the disparities based on religion, ethnicity and cast.”

A Christian priest explained that Jesus sacrificed his life for all the human beings. He showed that people who belong to different ethnicities must live peacefully in the society. He said that religion teaches people to love God, themselves and society.

A maulavi said, “Islam is a philosophy that guides the followers to be honest and obedient. Prophet Muhammad promoted peace and calmness. Muslims always respect peace. Real Muslims who follow the Al-Quran hate violence.” A Hindu priest explained that love was the basic principle of Hinduism.

Participants were given the opportunity to raise problems they had about other religions. A Hindu priest asked why the Buddhist clergy spoke about a Sinhala Buddhist nation. A Buddhist monk explained that the notion of a Sinhala Buddhist nation developed to protect the culture and identity of Sinhala Buddhists. & Although the behaviour of some religious leaders has created problems, Buddhism does not discriminate against non-Buddhist communities,&#39;&#39; the monk said.

The maulavis were asked about Islamic extremist groups and the reasons for the estrangement between Sinhalese and Muslims. A Maulvis pointed out that extremist groups worked for money or political influence. “They are committing crimes in the name of their religion but they are not accepted by the religion. People must not point their finger at the entire Muslim community because of a small group of offenders. Islam leaders must take action to banish them from the religion,” he said.

A Buddhist monk that priests were trying to spread Christianity in Buddhist villages and that many Buddhists had converted to Christianity. A Christian priests said that according to the constitution, religious leaders could encourage others to follow their religion and that they had a right to teach the religion.

The Hindu priests were asked the reason for animal sacrifice. A Kurukkal said that religion did not allow sacrifices but some groups followed the ritual. “People have changed some of the components of Hinduism to suit their needs,” he said.

Participants made suggestions to strengthen the co-existence among different religious groups while discussing the roles and responsibilities of religious leaders to develop a pluralistic society.