Taking TJ To The Grassroots 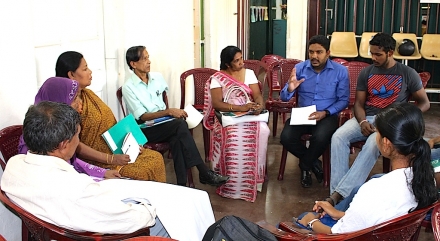 The meetings, which had 120 participants in total, were organised in collaboration with NPC’s partner organisations Sama Shakthi Sahajeewana Foundation in Kalutara, Environment and Community Development Information Centre in Ratnapura, and Human Rights Organisation in Kurunegala.

Through the three year IMPACT project, which is funded by Misereor, NPC will establish seven new DIRCs in total and create awareness within communities throughout the country of the requirements to progress from post-war to post-conflict development by explaining the principles of TJ.

Views and suggestions were collected from the participants for proposed reconciliation mechanisms. Workshops were conducted on pluralism, good governance, the Lessons Learnt and Reconciliation Commission and TJ.

A series of training workshops and pocket meetings, funded by the British High Commission, were also held to educate DIRC members and the public on TJ in Batticaloa, Gampola, Mannar, Puttalam and Matara.

The activities were led by trainers who had learnt about TJ from Patrick Burgess, an expert who conducted several training sessions in Sri Lanka recently.

The trainers explained that TJ was designed to take a country that had suffered conflict into a just and united post-conflict situation. Participants discussed each element - truth seeking, prosecution, reparations and institutional reforms - in groups and came up with examples of what civil society could do to support a TJ mechanism in Sri Lanka.Through the sessions, NPC expected to inform a large number of people on what TJ was and to train a set of people to educate larger groups.