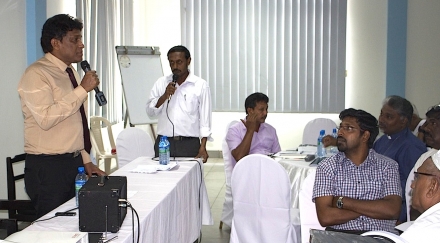 NPC initiated a discussion with civil society organisations from several districts of the country on strengthening the Transitional Justice (TJ) and reconciliation process, especially at the community and grassroots level focusing on district and community-based organisations.

The consultations were intended to provide inputs to the government as it develops its TJ, peace and reconciliation programme. Partnerships between the government and development stakeholders are vital to the success of the process. The ideas and suggestions of the participants were sent to the Task Force appointed to facilitate people’s participation in the reconciliation process.

One of the main issuesraised was how to get people involved in the process and put message of TJ across to the grassroots. At district level, provincial level and local level, it was necessary to know what people are saying about TJ, if they know about the government’s proposals and what they think about them.

Minister for Minister of National Coexistence, Dialogue and Official Languages Mano Ganesan said the government was going ahead with TJ. The work was slow because there were two political parties involved. He added that in the north and east, the police needed to improve their relations with civil society and the people. While the situation had changed at the top, it should go down to the grassroots level.

During the discussions, two key messages were highlighted. The first was the limited information available to the general population regarding TJ issues. There was an absence of strong and systematic messaging by the government. Participants pointed out that the government was composed of two leaders and two parties, and this resulted in an absence of clear messaging.

Second, the message from the Tamil-speaking participants from the North and East was their scepticism about the ultimate outcome of the ongoing TJ process. This highlighted the need for greater inclusion of such groups into the process and for trust building with them.

The role of civil society in these circumstances in taking the message to the people and in ensuring a sense of participation was extremely important.