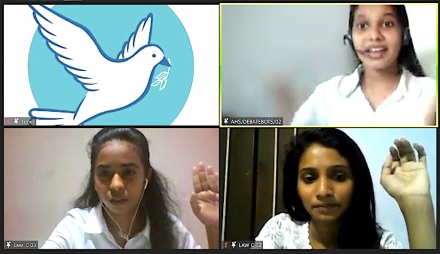 A series of debating competitions, Yarl Wageesara 2021, was organized by University of Jaffna under NPC's Creative Youth Engagement of Pluralism project. There were first rounds, quarter finals and semi finals. Before the contest, training programmes were conducted on pluralism and debate practices for the participants. There were 23 teams representing different faculties and different years.

The final was held on zoom. The topics were “To build ethnic harmony in future history subject should be completely removed from the curriculum and “Existing Provincial Council system is suitable to resolve the ethnic crisis in Sri Lanka”.

The judges included lecturers from the Colombo and Peradeniya universities, lawyers, debaters and researchers. Following the debate between the finalists, the judges shared their insights about the event and on the issues raised at the debates. The Faculty of Technology and the Department of Law won the first prizes.