Sharing the Lesson of Living Together Peacefully 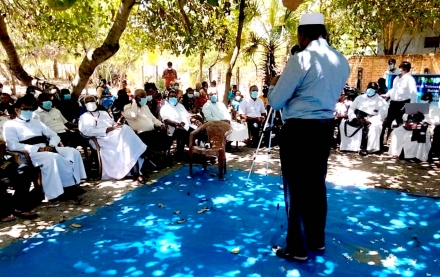 NPC’s Collective Engagement for Religious Freedom (CERF) project conducted a programme to share lessons and values of living peacefully in a small village named Sigram in Batticaloa, which has a multi religious and multi ethnic background. The village was selected considering the unity and harmony among the villagers who are from different ethnic, social and religious communities. The programme was conducted to explore their experiences while sharing their way of living peacefully.

The programme was broadcast live on Pirai FM, a SLBC regional radio channel and on Rhythm TV’s Facebook page. Creating a safe place for people to speak, it was a friendly discussion where village leaders and the religious leaders recalled their memories and past experiences while explaining the challenges they had encountered.

“Actually, this journey was not easy. We have experienced a lot during the war. Many displaced people from different ethnic and religious groups came to this village. The Muslim villagers warmly welcomed them and helped them to get settled. A lot of people also migrated here after the tsunami and they still live peacefully here with us,” one of the villagers said.

“We have established an inter religious committee to solve disputes between two parties in the village before situations escalate,” said a Muslim resident, adding that as a woman, she has contributed to strengthening peace in her village. She explained that there were no limitations on women helping others in Islamic religious teachings. “In my religion, there are no restrictions on women to support others while being productive members of society. My husband is proud of me because I play an active role in my village.”

Adam is one of the leading villagers in Sikram. “The secret is we all try our best to have peaceful lives here so we do not get involved in unnecessary issues with our neighbours. We solve our problems by talking,” he said.

Another woman said that they were always ready to help their neighbours. “If we have a special occasion, we invite our neighbours without considering their ethnicity or religion. We share our food; I look after their babies. My children play with children of other religions. We can strengthen peace through smaller initiatives as individuals,” she pointed out.

Due to the success of the programme, the CERF team has planned similar programmes in villages in the Trincomalee, Vavuniya and Mannar districts.