In July this year there was a clash between Tamil and Sinhala students at Jaffna University. The immediate cause of the conflict was whether a Sinhala cultural dance could be added to a welcome ceremony for incoming first year students. The student association decided against it and opted for the traditional Tamil cultural dance only. This led to a violent clash. One of the outcomes was the temporary closure of the university and departure of Sinhala students from Jaffna due to their fear of further incidents. 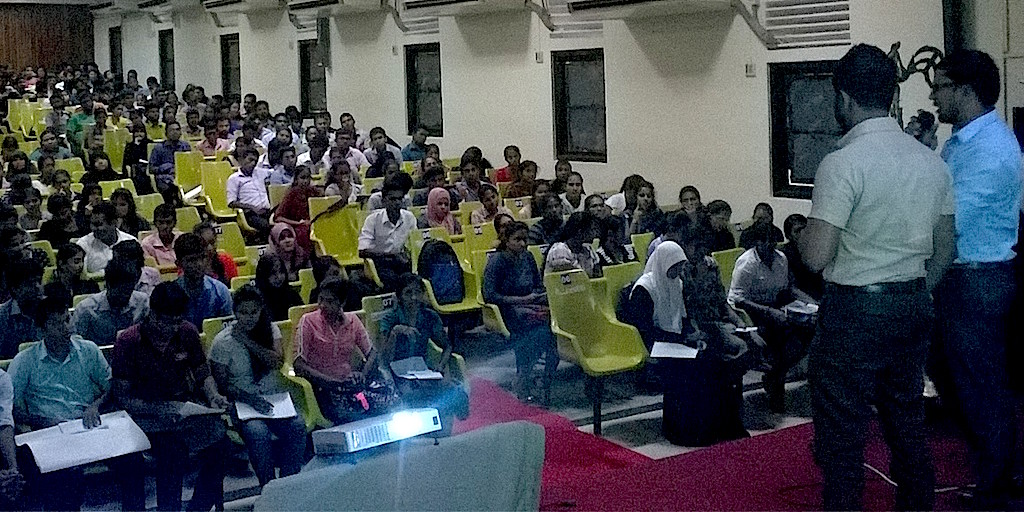 The university administration invited NPC and its partner Centre for Communication Training (CCT) to conduct a peace building programme for the students. The team of facilitators comprised NPC Executive Director Dr Jehan Perera, NPC Project Officer S. Kirubakaran, NPC Chairman and CCT founder Dr Joe William and CCT Project Officer Shivantha Rathnayake. Over 500 students attended the programme. About half of them were Sinhala students, with almost the same number of Tamil students and a lesser number of Muslim students (in the ratio of 4:3:1).

As part of the day’s events the students received a crash course on non-violent communication and thereafter were divided into 45 groups of 12 students each. In order to ensure a maximum of interaction between the different communities, they were assigned to the groups that were mixed by ethnicity (Sinhala, Tamil and Muslim) and by their years (first year, second year and third year).

They were asked to give answers to three questions: what were the burning issues they faced, what could the university authorities do to address them, and what could they as students do to help resolve those problems. Each group was asked to choose one member of their group to come up onto the stage and present the outcome of the discussions to the rest of the student body and to the members of the university administration who were also present.

The main issues highlighted by the students in their group presentations related to the need for better infrastructure facilities for their studies. They asked for free Wi-Fi facilities to enable them to access the worldwide web, which is available in universities such as Moratuwa University. They asked for a study hall for science students. They asked for a second canteen to purchase their meals as there is currently only one canteen in the university to service over 5,000 students and 1,000 staff members.

They asked for a gymnasium that is available in most other universities and for a swimming pool as found in Sri Jayawardenapura University. They asked for better hostel facilities, and that these hostels should accommodate students of all years, and not only first year and final year students.