The project focuses on strengthening community networks mentored by religious leaders and engaging them in building consensus for a TJ process and helping communities evolve a pluralistic national identity. The project is based on strengthening inter religious people-to-people community engagement for reconciliation and social cohesion in Sri Lanka.

A total of 294 people attended the eight project orientation meetings including religious leaders, local NGO/CBO representatives and government officials as well as young people and media personnel. The participants were Tamil, Sinhalese and Buddhists with 29 percent being women.

The orientation meetings included an introduction to the current socio political climate which covered the ethnic conflict, the rise of ethno-religious tension in the post war era, the need for empathy building among communities, building positive peace and embracing a TJ mechanism.
An introduction to the project including its objectives, activities and implementation methods was presented and participants were given a chance to ask questions and engage with the project team. They also discussed the current political situation.

Some of the issues identified by participants during orientation meetings included increasing religious disharmony fueled by racist rhetoric of some religious groups, lack of publicly accessible information regarding the government’s current work programme, rising cost of living, a sense of alienation felt by ethnic minorities, security of people in some northern areas and issues surrounding access to land.

In 2010, NPC set up eight DIRCs to address an increase in inter religious and inter ethnic disharmony at the end of the war. Through the Religions to Reconcile project, NPC is continuing its work with new members of six existing DIRCs and two DIRCs established specifically through the project in the Northern Province.
It is envisaged that grass roots communities in these districts will be mentored by multi faith religious leaders and as a result begin to understand, appreciate and finally support the TJ process in the country and work together to evolve a pluralistic national identity.

As part of understanding the current TJ process and its important facets, NPC held two-day TJ trainings in the eight districts carried out by internal and external resource persons and supported by the project team. The TJ trainings had a total of 298 participants including Sinhalese, Tamils and Muslims. Thirty four per cent were women. There were religious leaders, members of NGOs, media personnel, government officials, members of mediation boards and youth.

During the TJ trainings, many participants pointed out the lack of credible publicly accessible information regarding TJ mechanisms being implemented by the government. Some participants, especially from the North, felt that they were not being consulted when decisions regarding their future were being made and some questioned how the Sri Lankan TJ process was going to help address their grievances, especially with regards to missing persons. In the South, many participants showed interest in the process and said that it was the first time that they had understood what a TJ process meant for the future of the country.
The Religions to Reconcile project is being implemented in partnership with Generations for Peace (GFP), an international peace-building organization based in Amman, Jordan. GFP specializes in peace building/conflict transformation training and will assist NPC in building and establishing a cadre of peace delegates to support future project activities. 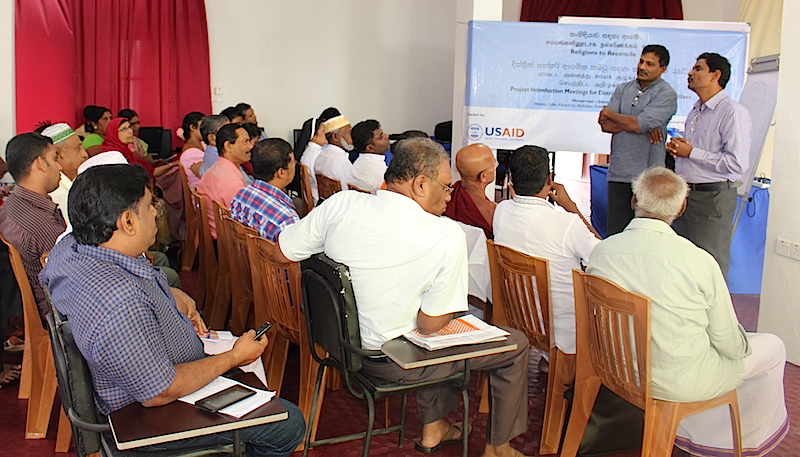