Phase III of NPC’s Reconciling Inter Religious and Inter Ethnic Differences (RIID) project, which was implemented with partner organizations that collaborated with District Inter Religious Committees (DIRCs) at the district level to build support for a Transitional Justice (TJ) process within the framework of the Geneva Resolution, concluded after nine months.

The project focused on reconciling inter ethnic and inter religious differences through DIRCs, which were established five years ago. The nine DIRCs have been functioning in the Ampara, Batticaloa, Galle, Jaffna, Kandy, Mannar, Matara, Nuwara Eliya and Puttalam districts. The total number of members of DIRCs is 625, increasing by 112 since the beginning of Phase III.

Even after almost eight years since the end of the war, inter community tensions are increasing due to acts of violence by extremist groups. Therefore inter community relations in some areas have continued to deteriorate and the sense of vulnerability felt by different ethnic and religious minorities remains unchanged.

Opponents of the government and extremist groups carry on their campaign against the implementation of resolution, adding to the polarization of the communities.
NPC addressed these issues and promoted effective district level mechanisms by supporting reconciliation through DIRCs’ engagement in building community support for a reconciliation process based on TJ, especially truth telling, and mitigating inter ethnic and inter religious tensions by networked and capacitated DIRCs to build trust within their communities.

Provincial truth forums, organized as a pilot initiative on truth seeking, served as an example on truth seeking in an eventual truth and reconciliation process. Seventy-two cases from war victims were recorded during the truth telling process.

The forums showed victims how to present their cases and stories before an official truth commission in future.

The people who were on the panel hearing the stories understood the need for follow up action by identifying victimhood from multiple perspectives. In the South, government agents on the panel told victims how to get relief.

Under this project a series of training programs on TJ, the Geneva Resolution and democracy and good governance were conducted for DIRC members, community leaders, religious leaders and local level politicians. Participants learnt about the recommendations of the Geneva Resolution including hybrid courts and justice mechanisms. They accepted that necessity of avoiding another war by establishing a concrete TJ mechanism and highlighted the importance of having more awareness programs at the grass root level.

• When Puttalam DIRC was trying to find information on an issue, its first step was to identify the chief incumbent of the Buddhist temple whose monk had placed a Buddha statue in a Hindu shrine and broken the till. DIRC members went directly go to the chief monk and talked to him without going through a middleman. This solved the problem in a short time.

• Students of Jaffna University were having a protest about two university students who were accidently shot dead by policemen. Jaffna DIRC religious leaders went to the site and asked the students to stop the protest and peacefully solve the problem through negotiation. The students listened to the religious leaders and stopped the protest. This method of intervention should be practiced in the south.

• In Galle DIRC members contributed to and participated in a foundation stone laying ceremony as an entry point to intervene in a case in which Tamils from Igalkandawatta and Sinhalese from the adjoining village were fighting over an attack by a Sinhala youth on a Tamil youth. The stone laying ceremony was to reconstruct a damaged Hindu temple with blessings of all the religious leaders. It showed that no matter which religion, everyone could participate to build unity. 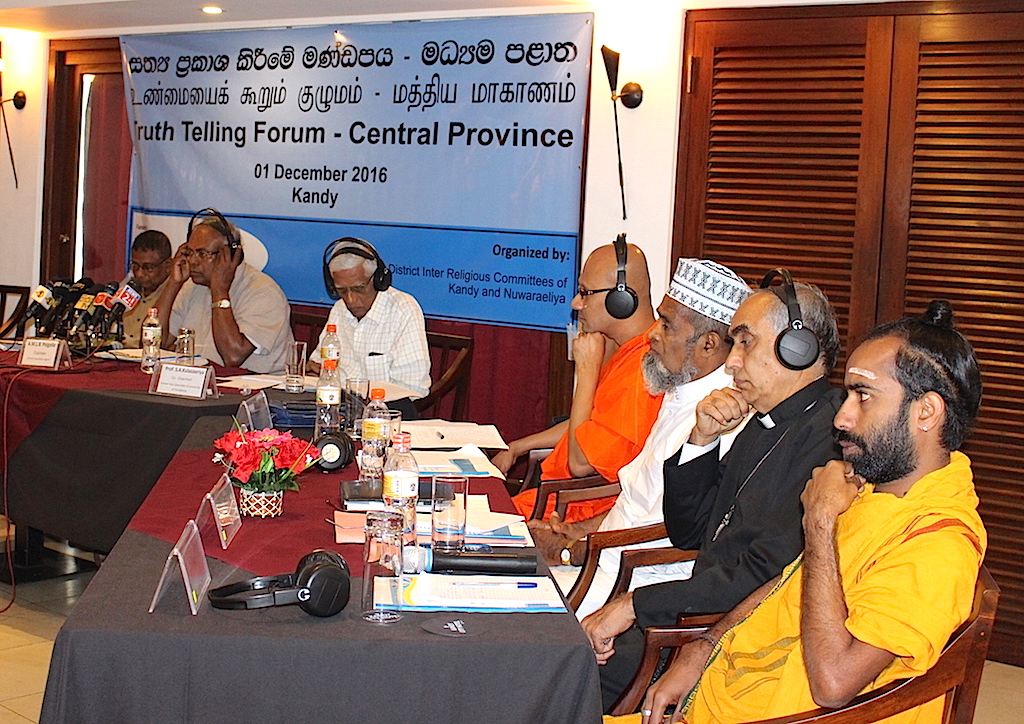