Vesak With A Difference in Batticaloa 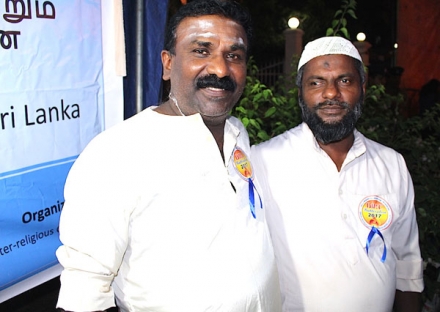 Members of Batticaloa’s District Inter Religious Committee (DIRC) decided to make it a Vesak with a difference by inviting people of all religions to participate in the celebrations. Although the Batticaloa district is home to Muslims, Tamils and Sinhalese, the different communities rarely participate at each other’s festivals.

Under NPC’s project Promoting Inter-faith and Inter-ethnic Dialogue in Sri Lanka, Batticaloa DIRC provided refreshments to some 1,500 people who were visited the town to see Vesak. In the past, Vesak had been celebrated only by the army or people at Buddhist temples and was considered by Tamils and Muslims as an event of Sinhalese. This year, leaders of all religions took part in the festivities. DIRC members wore traditional clothes to show the public that people of different religions had organised the event.

One problem was the lack visibility of the DIRC in Batticaloa. If people were aware about DIRC activities, they would bring any religious tensions or disputes to the attention of the DIRC. At the Vesak event, DIRC members gave a basic introduction to DIRC and its activities to the people who visited the town.

“I am really happy to be part of this event. My Tamil and Muslim friends (DIRC members) came to my home and we had fun while making food and soft drinks. This is the first time such a variety of people has come to my home and shop,” said a Sinhala DIRC member.

Details of the project were explained to the participants followed by talks by religious leaders on unity, religious harmony, respecting other’s religions and non-violence in their respective religions. They also explained misunderstood cultural traditions such as why Muslim women cover their faces, why Hindus wear pottus and what Halal is.

During discussions, the media wanted to know about putting up religious monument in public places. Religious leaders replied that the issue was more complicated than it appeared. However in the religions they represented, there was no promotion of religion by force.

The media personnel said the workshop had been useful to them and welcomed the effort by DIRC.