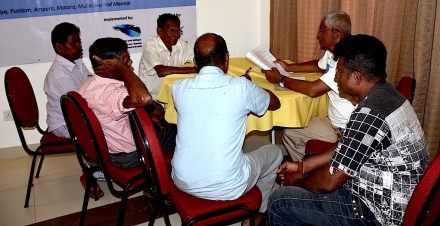 The NPC carried out training on Transitional Justice (TJ) for a group of local level politicians and community leaders from the Galle and Matara Districts under its USAID-funded Religions to Reconcile project, which is implemented with a Jordan based partner organization, Generations For Peace.

The training took place in Matara with 29 participants representing the government and the opposition. Resource person Jagath Liyana Arachchi, a legal expert on TJ and Director of the National Media Centre, explained the concept of TJ and its practical application in the Sri Lankan situation.

Documentation, video footage and other creditable resources, were used to impart knowledge on the post war reconciliation in the country.

The politicians appreciated the knowledge they gained and discussed with NPC and the resource person on how this knowledge should be further enhanced and shared with a wider community. They asked NPC to share its training and resource material to enable the knowledge transfer. The group also discussed how best the TJ framework should be implemented in the country, with several recommendations being put forward.

During the course of the training, NPC and the resource person were able to identify that very little knowledge was actually shared at the community level with regard to addressing the underlying issues to the ethnic conflict. This is why work carried out by CSOs such as NPC is important.

The project focuses on strengthening community networks mentored by religious leaders and engaging them in building consensus for a TJ process and helping communities evolve a pluralistic national identity. The project is based on strengthening inter religious people-to-people community engagement for reconciliation and social cohesion in Sri Lanka.