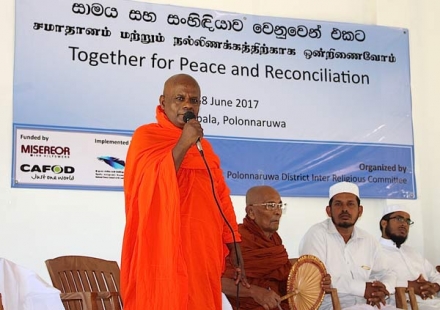 A session on learning about and sharing of cultural and religious values for supporting peace and reconciliation was held in Thambala and Oonagama areas in the Polonnaruwa district.

After the Buddhist extremist group Bodu Bala Sena’s attack on Muslims in Oonagama, extra security had been provided for the Ramadan season and a meeting had been held to tell people how to respond to any disturbance during that time.

About 120 people from three communities living in the area participated in the learning and sharing event, which was organized to emphasise the importance of building trust and maintaining friendship and harmony among the neighbours in spite of ethnic, religious or other differences. Participants were also told not to be misled by extremist groups.

The day prior to the session, when organizers met to discuss final matters, a religious leader said there was normalcy in the village and that there was no need for the event, as it could cause further problems. He wanted to cancel it.

NPC’s Project Manager Saman Seneviratne explained that the meeting would strengthen the bonds that bind the village community. He said it was necessary to remember the past in order not to repeat mistakes. His views were accepted and the meeting went ahead as scheduled.

The session included speeches from religious leaders, senior citizens, villagers and a police officer. The religious leaders spoke about importance of considering all people as equal human beings because they are neighbours, friends, brothers and sisters. They emphasised maintaining harmony among everyone for the development of the country and for peace for future generations.

The elders shared memories of unity and togetherness that created feelings of goodwill among the participants, making the event a healing activity.