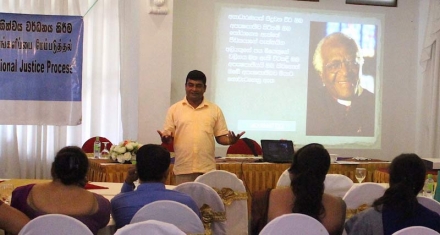 At the request of the Secretariat for the Coordination of Reconciliation Mechanisms of the government, the University Grants Commission has given NPC the green light to conduct programmes on Transitional Justice (TJ) in several universities for faculty members and students.

NPC conducted the first of these training programmes at Uva Wellassa University. Dr. Jayantha Lal Rathnasekara, the Vice Chancellor of the University, made an opening presentation. Academic staff representing faculty of technological studies, administration and export agriculture, and management attended the programme.

The first session was on the Geneva resolution given by Professor M. S. Mookiah who explained the background to the resolutions of the UN Human Rights Council that have been passed with respect to Sri Lanka since 2009.

The second session was on TJ presented by lawyer Jagath Liyana Arachchi. The difference between traditional justice and TJ was explained and the four pillars of transitional justice mechanism were elaborated.

During the question and answer session, several questions were posed to the speakers. Why would Sri Lanka replicate a model for TJ rather it setting up a local independent mechanism? Were there any other agendas behind into this training? Was the national judicial system adequate to address legacies of human right violations during the war?

Some participants believed that it was necessary that Sri Lanka adopted its own mechanism to address legacies of human rights violations and to promote reconciliation in the country rather it relying on international mechanisms.

The point was made that interference by local and international NGOs undermined the process of establishing peace and reconciliation in the country.

Participants noted that TJ mechanisms were not being properly implemented and that most people were unaware as to what they meant to Sri Lanka. They emphasised that TJ should be transparent and should incorporate all views from different groups considering a longer time frame than the end phase of the war.