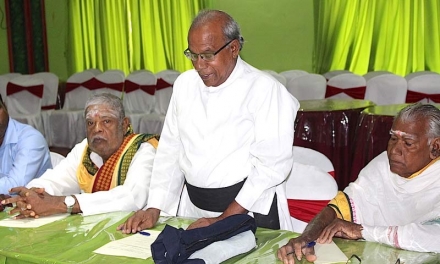 At its monthly meeting, Jaffna DIRC discussed ways of persuading Buddhist monks and other Sinhala people to join the committee and decided to make a plan to achieve this. Members agreed that activities could not be effective without the participation of all religious leaders and ethnic communities.

The members also decided to meet senior Buddhist monks in Kandy to persuade them to support constitutional reform. The monks have opposed any changes to the constitution.

One member brought up a problem in a village in Kilinochchi where there had been a statue of Ganesh for many years on land gifted for a kovil. Now a Buddhist statue had been placed there with military approval. To resolve the matter it was decided to get the support of a Buddhist monk to discuss the matter with the military.

At the meeting, a talk on pluralism was given by newspaper editor M.B.M. Fairros.

At the Batticaloa DIRC monthly meeting, one issue that was identified was about people posting racist ideas and comments on Facebook. However members decided that this problem could not be solved at a local level.

In the village of Wakarai, there was a dispute between Hindus and Catholics about burial grounds. A committee was formed to meet Hindu and Christian religious leaders and the GA to resolve problem. In Qurbillah village, there was no Muslim burial ground. A person had donated some land but other people were stopping burials there. DIRC members will meet the GA and religious leaders to find a solution.