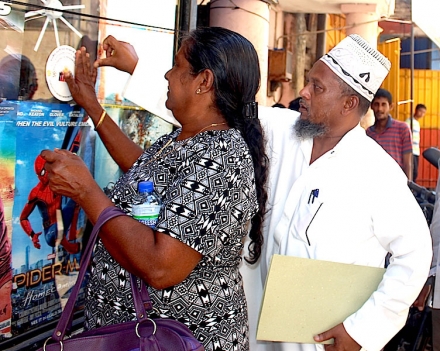 Hambantota town in a multi religious and multi ethnic place; although the majority are Sinhalese, there is a sizeable Muslim and Tamil population. For many years people of different ethnicities and religions have lived in harmony without disputes or conflicts.

During the early part of 2017, three incidents caused distrust and suspicion between the Sinhala and Muslim communities: Buddha statues had been placed on the main roads leading to the town and there were disputes about removing them; a Muslim youth had killed a Sinhala youth over a personal matter; and for the second time, the glass cover of a Buddha statue in front of a temple was broken by stones that were thrown at it.

The Chief Police Inspector of Hambantota discussed situation with Hambantota DIRC to see what could be done. DIRC members also met government officials as well as members of the Hambantota Trade Union and the Chief Incumbent of the Jayabodhi Temple. Efforts were made to meet and discuss the issues with the Muslim community.

DIRC organized a dialogue with religious leaders, with collaboration from Hambantota Police Headquarters, getting together those directly and indirectly related to the incidents. There were also 65 people representing various sectors who participated in the dialogue.

A Co-existence Committee was established that included police officers, religious leaders and civil organization representatives. The Chief Police Inspector agreed to support the work of the committee, whose primary role was to take action to minimise conflicts.

A sticker pasting programme was launched to create awareness among the people of the town. Police officers, religious leaders, DIRC members and members of other civil organizations pasted 1,000 stickers, bearing the message, “stand together for religious coexistence” at commercial locations as well as in buses and three wheelers.

“This was a special event. We were able to come together and work for coexistence among ourselves. It is not only the duty of the police to maintain peace; it is the responsibility of all of us,”
said a police inspector.