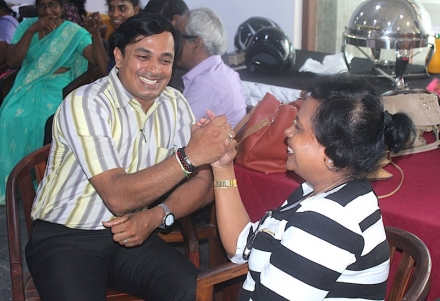 Young people in the multi ethnic Trincomalee district were given the opportunity to interact with their peers of different religions and ethnicities to celebrate Youth Day. The activity was organized by Trincomalee District Inter Religious Committee (DIRC) under NPC’s Promoting Inter-faith and Inter-ethnic Dialogue project.

The project is supporting inter-faith and inter-ethnic dialogue at the local level in order to create networks and understanding among religious and other community leaders in the Trincomalee and Batticaloa districts, both located within a high risk province.

Four students from four Hindu, Muslim, Buddhist and Christian schools were selected to collect information on basic religious practices and rituals and non-violence. The students visited religious places of worship and met religious leaders. After they had gathered the material, they attended the DIRC meeting to present their findings. They shared the experiences they went through during the visits. DIRC members then discussed young people’s role on peace building and interfaith dialogue. Steps were made to document the young people’s findings and follow up.

One of the common issues discussed was how young people did not respect other religions. The reason for this attitude was that they did not know about other religions and needed an opportunity to study them.

Some schools in Trincomalee districts are attended by students of only one religious group, so they are not exposed to other religions or ethnicities and become culturally insensitive. When young people know and appreciate other religions, they will pass the message on to their peers and the community.

The participants were enthusiastic about the activity, which was welcomed by DIRC members. They were motivated to share their experiences with their communities and peers. The outcomes of the activity were discussed at the DIRC meeting.