Sports and Arts to Build Understanding in Galle 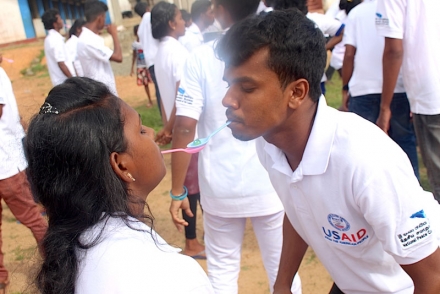 Sixty seven young men and women attended a sports and arts session to build understanding among different communities conducted by peace delegates in Divithurawatta in Galle. The weekly sessions are held in eight districts.

The peace delegates were trained under the USAID-funded Religions to Reconcile Project being implemented by NPC together with their international training partner, Generations For Peace (GFP) based in Jordan.

The project focuses on strengthening community networks mentored by religious leaders and engaging them in building consensus for a Transitional Justice (TJ) process and helping communities evolve a pluralistic national identity.

The group took part in a warm up activity followed by the main game, passing a marble using a spoon, which nurtured cooperation among the participants.

After the session, participants said that they did not see language as a barrier for coming together to play. They wanted the sessions to continue even after the project concluded and asked more people in the community could be included.