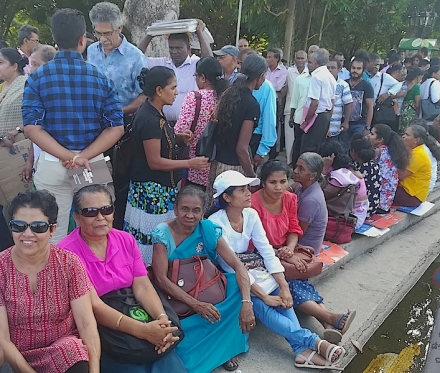 Puravesi Balaya (Citizens Power) brought activists together in Colombo to show solidarity with international efforts to direct the government onto the path of reform promised at the presidential and general elections held in 2015.

The event took place to mark the two years since the election of the National Unity Government on August 17, 2015. The main feature of this exercise was to bring to public attention what the government has yet to do, even while applauding the government what it has done.

This was a collaboration with over 20 organisations that span victims’ rights, human rights, good governance and peace building. There was participation by over 100 activists from NPC's DIRC network.

The event was in the mode of a peaceful gathering of people from around the country including victim families. This exercise was necessary at a time when the reform momentum has been receding. Several government leaders committed to the reform process, including Mano Ganesan and Rajitha Senaratne, attended the meeting and delivered short speeches.