Vavuniya Families Will Not Give Up 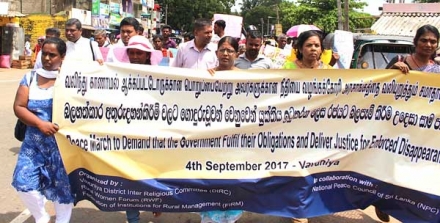 About 400 people marched through Vavuniya town in support of families of the disappeared. A letter requesting information about missing people and demanding justice was handed over to TNA MP Sivashakthi Anandan, who promised to give it to the President and Prime Minister.

For the first time, religious leaders also participated in an event in support of demanding that the government finds out about missing persons.

The march was organized by Vavuniya District Inter Religious Committee (DIRC) with its partners the Federation of Institutions for Rural Management and Rural Women’s Forum under the MISEREOR, CAFOD and FOKUS-supported project, Initiating Multi Level Partnership Action for Conflict Transformation (IMPACT).

“I have lost my 16 year old daughter. She has been missing since 2009. Like me, there are several parents who are suffering. I hope the government answers all the questions arising from the war that affect Tamils and Muslims as well as the Sinhala people and resolve the issues quickly. We appreciate the work done by the DIRC to bring together religious leaders,” said Kamaladevei from Vauviniya.

“I urge all TNA MPs to sit here and make their voices heard by the international community. I lost my elder son in 1990 and in 2008, a white van abducted my younger son too. Can anyone imagine my loneliness in my old age? Where is the UN? Where is Mr Sambanthan? What they are doing and when will they hear our sadness?” asked Arirathinam Analakshtumi, who is on a hunger strike in Vavuniya town.