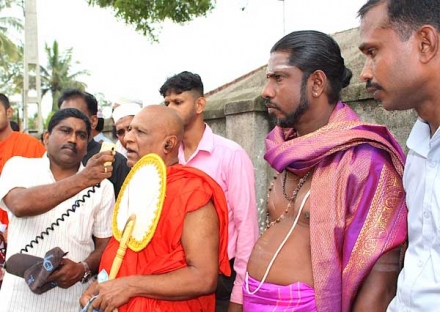 Badulla DIRC organised a peace walk through Badulla town for raising awareness on building national unity through inter religious harmony. DIRC members met several leaders of the four religions to obtain their support for the walk and to set the agenda.

About 100 people including religious leaders, government officials, civil society leaders and trade unionists took part in the walk, which ended at the local government office where a Buddhist monk, Christian priest, Hindu Kurukkal and Moulavi spoke on the need for religious tolerance and harmony.

“In a town such as Badulla, what is most important is to respect reach other’s religion, so we should all unite to protect the rights of every religion,” said Father Priyalal Cooray from Bishop’s House.

“The Muslim community appreciates the work done by Badulla DIRC. This is the first time in the district that all religious leaders have gathered to demonstrate the importance of religious harmony,” said Chief Moulavi Suhaib,

“It was nice to see all four religious symbols printed on the handbill distributed to the public during the peace walk. It is a sign of religious unity,” said Kurukkal Ganeshalingam.

The religious leaders also lit a peace lamp to demonstrate the importance of religious harmony.

“There are no problems among the people. Problems are created by politicians. We should bring pressure on the politicians not to disrupt the peace among religions,” said Rev. Muruddeniye Dammaratana.