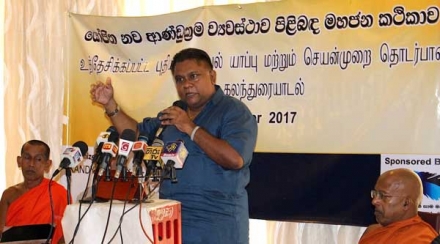 Aspects of the new Constitution were discussed and misconceptions were cleared up at a meeting organized by Kandy DIRC under NPC’s project Initiating Multi Level Partnership Action for Conflict Transformation (IMPACT). Around 100 DIRC members, religious leaders and activists, of whom 30 per cent were women, participated.

Similar people’s dialogues have already been held in Kurunegala, Colombo and Badulla aimed at building awareness of the new Constitution and explaining its importance. Ten discussions in total, supported by CAFOD, will be held around the country, including the North and East.

At the meeting, many people said they did not know the difference between a Federal and a Unitary state and believed that Federalism meant separation. Others thought that the government would not be able to win a referendum on Constitutional reform while some people voiced the opinion that although many fundamental rights were enshrined in the Constitution, Sri Lankans were not knowledgeable enough to fight for those rights through the legislative system. Some believed that the new Constitution was being drafted by the United States. The facilitators clarified the misconceptions and explained the issues.

Other questions raised included what were the rights of the Sinhala people if they went to Jaffna, how the centre could retake the powers if the Provincial Councils misused their authority, why Provincial Councils needed so much money when they were not providing services to the people and whether devolution would unite or divide people.

Estate workers complained that their rights were not addressed in the Constitution and asked how they could be guaranteed. One participant wanted all references to religion removed from the new Constitution.