Bridging the Ethnic Divide with Culture in Galle 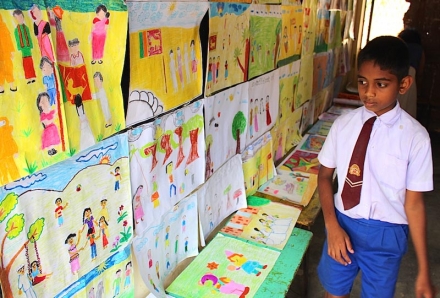 The village of Divithurawatta in the Galle district is home to Tamils and Sinhalese. The Tamil people are mainly estate workers living on tea estates in the area.

Despite many generations of living together, the different communities do not interact and have little to do with each other. This schism has led to misunderstanding and tension - especially as the Tamils feel that the Sinhalese do not respect their culture - demonstrated in the form of sporadic incidents.

Children are divided into Sinhala and Tamil schools and have no opportunity to understand each other’s cultural traditions.

After this lack of harmony was discussed at Galle District Inter Religious Committee (DIRC) meetings, members decided to hold interactive sessions to bring about awareness of various cultures and religions found in the country, especially among young people.

At the sessions dances, songs and dramas were performed with explanations of the four religions while religious leaders spoke to the young people about how to build coexistence. A painting competition was also held.

Galle DIRC had special participatory discussions about the values of the religions and the benefits of pluralism.