Interaction and Dialogue DispelMisunderstanding and Distrust 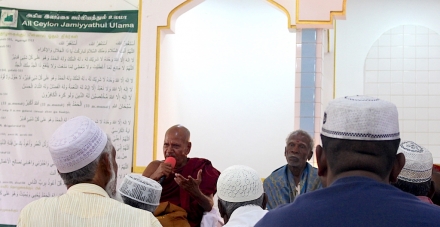 Monaragala District Inter Religious Committee (DIRC) organized a dialogue on building trust and fellowship among a group of Muslims, Tamils and Sinhalese from different areas of the district. The event took place in Bakinigahawela village in the Monaragala district, which is a Muslim village.

The objective of the visit by Sinhalese and Tamil people to the village was to rebuild trust by understanding Islamic cultural and religious customs and to remove various misconceptions about the religion and its people.

Conflicts had arisen between Muslims and Sinhalese in the area over misunderstandings about Muslims killing cows and allegations that they control the Sinhala population growth through devious means.

The visitors participated in a clean up of the school premises. Then they went to three mosques in the village to have a dialogue with the Moulavis. They returned to the school and discussed their experiences during the visit. Many referred to the fact that Muslims and Sinhalese had lived in harmony in the past. Some people sang peace songs. The visitors and the villagers asked and answered questions, told stories and gave opinions.

A young Sinhala mother from Wellawayasaid,“My husband has Muslims friends. I have spoken to some of them. One of my children is having tuition from a Muslim teacher so I go there and sit outside the house until the class is finished. I came for this visit even though I did not like Muslims because they kill cows for meat.

“I am glad I came because I learnt about the good aspects of Islam. The people in the house where I stayed treated me very kindly and gave me tasty food. I was welcomed warmly. We have exchanged phone numbers and decided to visit each other soon. We are all are human beings. We are all citizens of this country and have to be treated equally.”