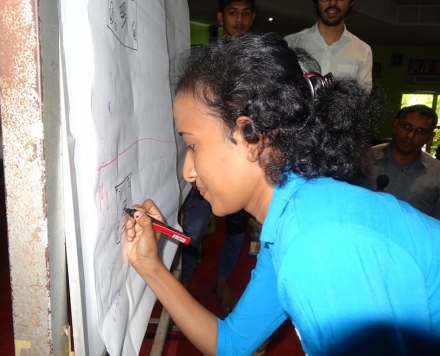 M.I.M.Usanarspoke on the Constitution, reviewing it since the inception. His presentation was a starting point to consider the current constitutional reform debate.

Ethirmanasingam outlinedthe mediation process, its importance and how it has functioned in the country while R. Manoharanspoke on the basic theories and principles ofTJ. He referred to the successful case of South Africa and pointed out the value of unofficial actors such as NGOs and civil organizations in the process of TJ.
M.M.M. Naleamexplained the essence of NVC, giving examples such as relationships between parents and children while K. Yoshihama shared a discussion on Constitutional reform in Japan and emphasised that it was essential for the younger generation to learn about the issues.

Almost 60 percent of the participants were below the age of 29 years. The youth had discussions with the older generation and exchanged views.

During a discussion on the mediation process, there was disagreement between the younger and the older generations about the Mediation Board Commission, which had no term limit for its members. One participant saidthat bringing in younger people was important for the mediation process while some older people maintained the importance of experienced members.

One participant said there was a lack of opportunities to learn about such topics. Another participant suggested that there should be more interactive components such as activity and group work.