Bringing Communities Together in Hambantota 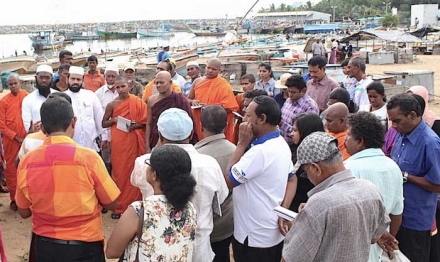 NPC organized an exposure visit by representatives of its 16 District Inter Religious Committees (DIRCs) to Hambantota. A total of 35 people including religious leaders and civil society members were hosted by the Hambantota DIRC.

The main objective of the exposure visit was to share experiences gathered from each district. DIRC members shared information about the issues that arose in their areas and what steps were taken to find solutions. They got to learn that many of the problems they faced were common to those in Hambantota.

The group visited several places to understand way of life of Hambantota people. They met fishermen at the harbour, who complained that no one listened to their grievances.They said they were not given any assistance from the government and were undergoing many hardships due to the renovation of the harbour.

DIRC members also shared views with the Muslim community living in Hambantota. The Muslim peoplein the group were happy to see their community members living peacefully in the district compared to other districts such as Galle where there were tensions among different communities. At the District Secretariat, DIRC members were able to see how the country’s most effective Secretariat functioned. All government institutions in the district were in the same building. At a discussion with local politicians, the group realised that politicians from different parties wanted a united and peaceful Sri Lanka, as did injured army personnel who wanted reconciliation in the country.