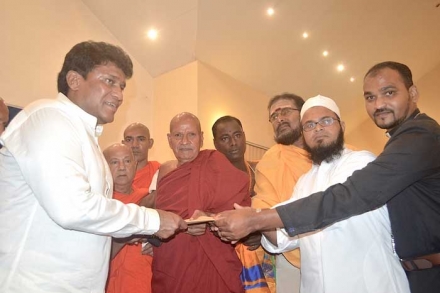 The National Inter Religious Committee had formulated a set of recommendations for finding solutions to many challenging issues facing the country. The recommendations were handed over to the Chief Guest, Minister of Minister of National Co-existence, Dialogue and Official Languages Mano Ganesan, at the symposium.

Project Manager SamanSeneviratne said the symposium was an acknowledgement of the work done by DIRC members and an opportunity for them to voice their views and gain due recognition.

NPC Chairman Joe William said NPC had been coping with the challenges of religious and ethnic diversity for two decades, and part of its answer was to set up DIRCs, which now served as a focal point at local level for problem solving. The issues and solutions brought up at the local level were taken to national policy makers for consideration.

Dr William said that role models were to be found in religious leaders, who could work with shared values to heal the wounds of war.

Mr Ganesan said that although some may think Sri Lanka was losing the battle for peace and coexistence, he rejected that opinion because it was still possible to find solutions to national issues through dialogue and discussion. “We are glad we have little ethnic and religious tension. Although there are some issues, conditions have improved compared to the past,” he said.

NPC Executive Director JehanPerera said NPC’s work was recognised by the government and the international community. He said the situation in the country had improved and that civil society had the freedom to work without fear. On the negative side, people who lived outside the North and East thought the war was over so only economic development was necessary and NPC’s work was not valuable. But in the North and East the situation was different, he pointed out.

Representatives from the 16 districts shared experiences and success stories in their areas of diffusing ethnic and religious tension and intervening to bring about peaceful solutions to many varied issues.

In MoneragalaBuddhist monks and Sinhalese DIRC members had visited a Muslim community, who welcomed them warmly. They shared meals, visited mosques and cleaned up schools, creating a bond between the two communities that had been hostile towards each other. Members from the Jaffna DIRC had gone to Kandy to meet the chief Buddhists monks to try and change their minds about the need for Constitutional reform as well as explaining issues affecting people in Jaffna.

Sinhalese and Tamil people in the Galle district live in a constant state of tension. The DIRC had worked to minimise the conflict with activities such as art competitions and talks by religious leaders who preached peaceful coexistence. In Matara,DIRC activities such as seminars on national unity and awareness raising marches were aimed at minimalising radical views. These activities had a good response from the public. In Polonnaruwa, the DIRC had worked to allay fears of the Muslim community during the Ramadan period by requesting additional security during that time.