Unity in Diversity: The Message in Ampara 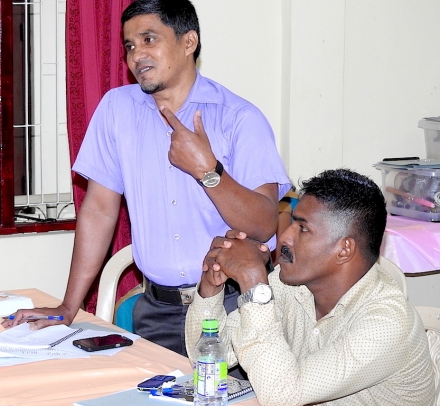 The introductory activity of NPC’s new project “Collective Engagement for Religious Freedom (CERF)” in the Ampara district was conducted with the Social Organizations Networking for Development (SOND) at the Social Welfare and Development (SWOAD) district head office, Addalachennai.

The project is designed to accelerate religious freedom in the eight hotspot areas, within the framework of pluralism and rule of law, employing the structure of Local Inter Religious Committees (LIRCs). These encompass the state-level law enforcement authorities (police) and other relevant officials as well as inter religious and civic leaders in the area.

The objectives are to strengthen collective local commitment to necessary environment for the practice of religious beliefs, and to promote inter faith dialogue for inter ethnic coexistence and non-discrimination.

The orientation meeting in the Addalachennai Divisional Secretary Division aimed to set up the LIRC in the area and to provide members with an opportunity to gain an overview of the project including its concept, objective, background and scope.

There were 38 members present who represented government offices, police, local NGOs and schools, as well as religious leaders of Islam, Hindu and Christianity.

LIRC members showed that they had a strong sense of ownership of the project. According to the evaluation, 89 per cent of the members said they were very satisfied to be selected to the LIRC in the area and 95 per cent were fully committed to future participation and contribution to the project.

One of the members said that the project should encompass the majority in the country and involved them instead of focusing only on the minorities, in order to eradicate the root of the issues.

Mr. Wimalasena, Sub Inspector of Addalachennai Police Station, said the police would support the project by sharing the knowledge and skills that they have gained through their experience of settling past issues in the area.

Chief Kurukkal, Vishwapramma Shree Thangavel, pointed out that it would be impossible to solve problems in a united and cooperative way as long as politicians continued dividing the people. In order to promote an on-the-ground peace process, it was essential that the members from different backgrounds worked together on the project.