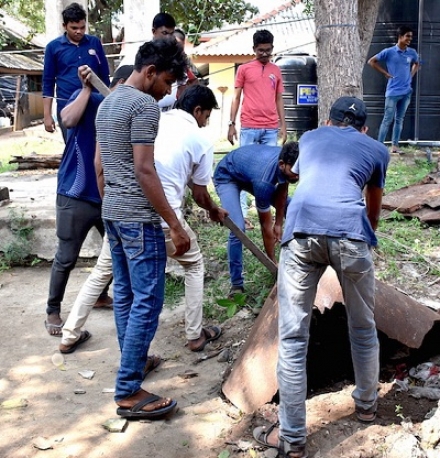 The youth group formed under NPC’s Religions to Reconcile project, funded by the United States Agency for International Development (USAID) and implemented with a Jordan-based partner organization Generations For Peace (GFP), organized a campaign to clean up the Puttalam hospital and the surrounding premises to address the dengue epidemic that has become a life threatening issue in the district.

The youth group also carried out a sticker distribution campaign to create awareness on dengue and the importance of keeping the environment clean to beat the epidemic.

The Religions to Reconcile project focuses on strengthening community networks mentored by religious leaders and engaging them in building consensus for a Transitional Justice (TJ) process and helping communities evolve a pluralistic national identity.

The youth group, which includes Sinhalese, Tamil and Muslim youth, donated paint for the children’s ward and main gate of the hospital. It handed over plastic bins to the hospital to keep in different wards. Stickers were provided to differentiate garbage.

The Media and Youth Groups of the Kilinochchi District, formed under the Religions to Reconcile Project, organized a Cultural Sports Festival for 12 sports clubs from the Kilinochchi district with Tamil and Muslim youth members taking part in the event.

The program was held to facilitate peace and reconciliation among youth in the district and to celebrate the Thai Pongal Festival.