Eye-Opening Visit To The North 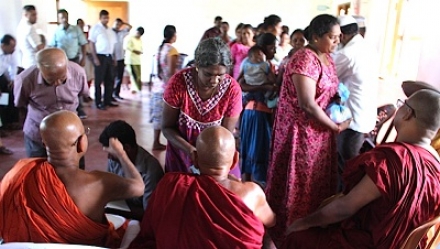 Thirty seven members from 16 District Inter Religious Committees (DIRCs) participated in an exchange visit to Vavuniya and Jaffna. The members shared the social, economic and cultural situation in their respective districts and identified many issues of concern.

In Poonthotam village, they met 15 families of the disappeared who said they appreciated the visit of religious leaders to the north. They felt people in south were not listening to them. They were also unhappy with Buddhist monks in south opposing Constitutional reform. They wanted reparations and did not trust the Office of Missing Persons to find a solution because it was similar to previous commissions of inquiry into disappearances. They asked the army to give back the people who had been handed over to it. People in the group from the south who had missing family members shared their experiences with the villagers of Poonthotam.

The group then visited Kokkiliya village, home to 40 displaced families of all ethnic communities, where the major concern was the lack of livelihood opportunities for the mostly female headed households. Those who did have small businesses were unable to market their products. School facilities were poor. They had to travel far to find water and land for cultivation was scarce as was housing and other infrastructure.

When they met the Muslim community in Jaffna who had returned after being chased out by the LTTE during the war, the group heard stories of displacement and lost livelihoods, history and education. Many Muslims still lived in Puttalam as refugees because they were suspicious of Tamils in Jaffna. The Muslim community pointed out that they were unable to get a Muslim representative in Parliament from the district. When people came to discuss problems in the district, they paid attention to Tamils and not Muslims, who were disregarded although they had undergone the same hardships, community members said.

At the Udayan newspaper office, the group met Mr C. V. K. Sivagnanam, Chairman of Provincial Council, and discussed the views of people in the south and north on the current political situation.

On the new Constitution, some people told DIRC members that they had no problem with Buddhism being given priority. Others believed that devolution was necessary to solve the political problem.