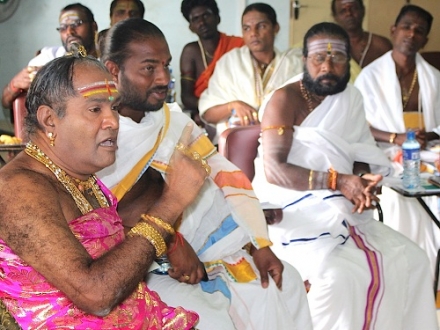 Under its IMPACT project, NPC held a training workshop on Transitional Justice (TJ) for 32 Hindu priests, from the districts of Ratnapura, Badulla and Nuwara Eliya.

The facilitator was lawyer S. Niranjan, who described the principles of TJ to the participants. NPC Senior Project Officer, Shantha Pathirana, explained the importance of reform and LLRC report.

Workshops have also been held for Catholic priests in Kandy, Moulavis in Batticaloa and Buddhist nuns in Badulla so that the religious leaders, who had the trust of their communities, could explain TJ to their community members who had been affected by the war.

The Hindu priests said the issues were important but that they usually dealt only with religious matters and did not get involved in politics. They required permission from their main religious body to talk about such issues with their congregations.

For many of them, it was the first time they had heard about the TJ process. They wanted to participate in further training. They were confident to work with NPC, which was recognised as an organisation working for reconciliation at the national level, they said.