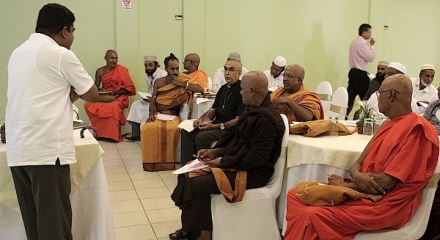 A training workshop on Transitional Justice (TJ) for 40 religious leaders from all faiths from the Kandy, Polonnaruwa and Anuradhapura districts was held in Kandy.

The workshop was facilitated by lawyer Jagath Liyana Arachchi and conducted under NPC’s IMPACT project.

The participants discussed Constitutional reform and government progress towards reconciliation with mechanisms such as the Office of Missing Persons and the Witness Protection Act.

Also under the IMPACT project, Polonnaruwa DIRC conducted English classes for low income students for schools children and school leavers. English classes conducted by private teachers were too expensive for most people in the district, so DIRC members had decided to hold free classes for disadvantaged children so that they could improve their English and become more competitive in the job market. Some DIRC members taught the classes on a voluntary basis.

A ceremony to distribute certificates was held at the monthly meeting of the DIRC, which was attended by the Polonnaruwa Government Agent (GA), Education Director and school principals. The GA expressed his appreciation of DIRC’s intervention in educating people on how to reduce ethnic tension.

Members of the Kandy DIRC, who also attended the meeting, shared their activities to mitigate recent anti-Muslim violence in the Kandy district.