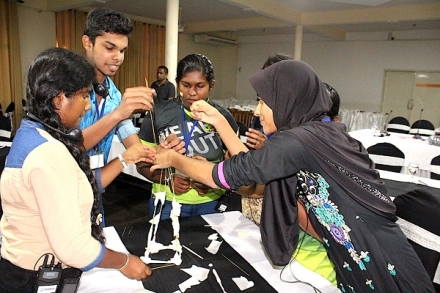 The first workshop for community youth leaders under the UN Peace Building Fund supported “Youth Engagement with Transitional Justice for Long Lasting Peace in Sri Lanka” was held in Kalutara.

Through this project NPC seeks to engage with young men and women throughout the country through a three-fold strategy in which law students will be trained and mentored to be able to utilise the Transitional Justice (TJ) mechanisms as an effective and non-violent way to address past abuses; university students will be empowered and capacity built to become engaged in positive dialogue, including with policy-makers on TJ and reconciliation activities; and young grassroots activists will be supported to understand and address key youth concerns and transmit them to policy-makers.

A total of 44 youth leaders drawn from youth groups, the National Youth Services Council and from local government authorities participated in the workshop. Most of the participants said that they knew little or nothing about the country’s post-war TJ process prior to the workshop, which reflected a serious lacuna in the government’s communication strategy.

They appreciated the inputs given by SanjeewaWimalagunarathna, Director of the Local Activities Coordination Unit of the government’s Secretariat for Coordinating Reconciliation Mechanisms (SCRM), and the facilitation of the workshop by ShivanthaRatnayake of the Centre for Communication Training who also introduced them to the topic of TJ and its four main pillars. NPC’s Executive Director,DrJehanPerera, explained the objectives and mission of NPC in the context of the still unresolved ethnic conflict.

One of the issues on which there was animated discussion was on the rehabilitation of former LTTE cadre. Several who spoke said that they needed to be brought into the mainstream of life and provided with education and employment, as they were young people just like others. However, concern was also expressed that this build up of their capacities should not pave the way for a return to militancy