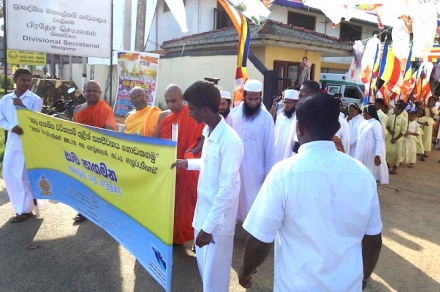 A peace march to promote religious freedom and pluralism was organized by the Local Inter Religious Committee (LIRC) in Weligama and NPC’s local partner Voice of South under the NPC’s project Collective Engagement for Religious Freedom (CERF). The message of the march was creating coexistence through multi religious values, teachings and celebrations.

About 300 religious leaders and school children participated as well as government officials and police officers. Archbishop of Galle Raymond Kingsley Wickramasinghe was a special guest.

After the march, a lecture on religious freedom was delivered by Dr. Kumbalgoda Dhammaloka Thero, who has translated the Bible into Sinhala. Dr. Kumbalgoda Dhammaloka Thero highlighted the importance of using religion as a connecting factor rather than a dividing factor. “Religious leaders coming together to build peace at a time like this will ensure that their followers will also do so,” he said.

Also under the CERF project, the first bimonthly meeting of Akurana LIRC was held after the violence in Kandy.

Madawa Warnakulasooriya, Divisional Secretary of Akurana, said that it was necessary to rebuild trust in the law in the area while Inspector of Police of Alawatugoda called for more legal awareness programmes.

The participants shared ideas on preventing further violence. Lack of understanding of other religions, misuse of social media and language barriers were cited as causes of religious tension. Participants stressed the importance of creating more advocacy groups and youth groups so that young people could learn about different cultures. It was agreed the business community should also be involved in peace building activities.

An action plan was formulated to address the issues. The Officer In Charge of Alawatugoda Police thanked NPC for motivating the community and promised to provide necessary support to implement the action plan successfully.