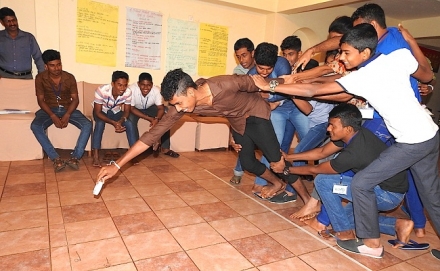 A series of training workshops on Transitional Justice (TJ) was held for university students and youth under NPC’s project Youth Engagement with Transitional Justice for Long Lasting Peace in Sri Lanka, which is funded by the UN Peace Building Fund. The programme for universities was held at the Eastern University for 53 undergraduates and was supported by the Secretariat for Coordinating Reconciliation Mechanisms (SCRM).

On the second day Mr. Hakeem focused on changing the attitudes of the youth. At the beginning of the training, the students had fixed ideas and their opinions differed according to whether they were Sinhala or Tamil but after the training their questions were more neutral and they all agreed that TJ should be implemented as a process for reconciliation.

At the training workshop in Anuradhapura, the participants were youth parliamentarians, Youth Council members and vocational training students. Some came from border villages in the Polonnaruwa district. They were all Sinhalese and said they had never heard of TJ.

Activities included role playing, making posters, writing and story telling designed to bring out their thoughts on war, victims and truth and to empathize with the difficulties of others such as relatives of the disappeared and ex combatants.

Most of the participants at another workshop in Batticaloa had been affected by the war. They included former military men, schoolteachers and youth parliamentarians. Being in the minority in the district, the Sinhala youth were more attuned to the ethnic problem and were ready to listen to the stories of Tamil people.

One war survivor from Batticaloa asked how it was possible to move forward without knowing past while another youth from Ampara said memorialisation was a way to heals wounds of war. A Sinhala youth said the government’s communication on the process of reconciliation was poor. Mr. Rashi Chandranath, Acting Director of Communication at SCRM, said steps were being taken to address this problem.