A Collective Voice for Peace in Ampara 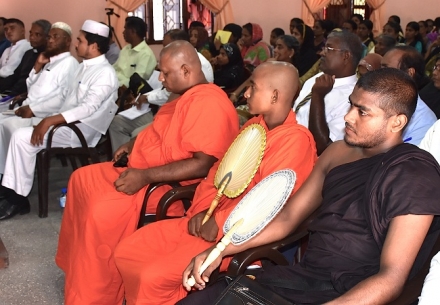 The project is being implemented by NPC supported by the U.S. Government’s development agency USAID (United States Agency for International Development) and is implemented with a Jordan-based partner organization, Generations For Peace (GFP).

The 26-month project began in October 2016 and targets the districts of Kilinochchi, Mullaitivu, Mannar, Puttalam, Nuwara Eliya, Galle, Matara, and Ampara and focuses on strengthening community networks mentored by religious leaders and engaging them in building consensus for a Transitional Justice (TJ) process and helping communities evolve a pluralistic national identity.

A team of religious leaders from the Ampara DIRC led by Moulavi A. A. Azwar and Ven Ranmuthugala Sangaratna Thero, chief incumbent of the Kalmunai Buddhist temple, worked with other religious leaders and community members to organize the conference, which was attended by 10 religious leaders representing all faiths.

Other speakers included journalist A.L.M. Saleem and Principal of Wesley College in Kalmunai V. Pirabaharan, who shared their aspirations for a peaceful Ampara District and Sri Lanka. Ms. Manoja Priyadharshani, representing the Sinhala community, spoke on the importance of having one voice for peace and Ms. K.L. Shaheela read a poem on peace. Ven Ranmuthugala Sangaratna spoke in the Tamil language and said that one of the biggest stumbling blocks for peace in Sri Lanka was not knowing the language of the other.