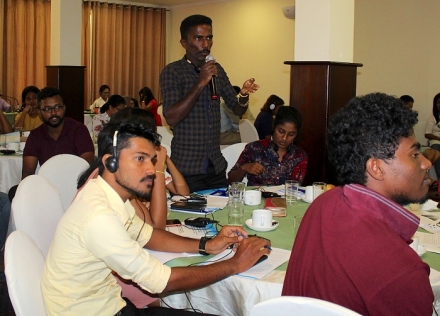 The need to increase awareness among youth about the reconciliation process was a key finding of a research forum in Colombo to discuss issues related to the Transitional Justice (TJ) process that concern young men and women and their opinions on security, freedom and co-existence after the Easter Sunday attacks.

The research forum, attended by youth from 21 districts, was aimed at understanding the extent to which youth knew about TJ and the related issues, concerns, misconceptions and questions.

The discussions at the forum were based on a survey commissioned by NPC on youth’s knowledge, attitudes and perceptions on TJ in Sri Lanka with youth aged between 18 to 29 years and university students under its project Youth Engagement with Transitional Justice for Long-Lasting Peace in Sri Lanka, which is implemented with the support of United Nations Peace Building Fund.

The survey, which was conducted by Dr Pradeep Peiris, Senior Lecturer Department of Political Science and Public Policy at the Colombo University, was carried out among 11,000 youth in 21 districts and also captured the views of 400 adults in order to obtain a comparative understanding of the youths’ views on reconciliation and peace building.

Addressing the participants NPC Chairman Dr Joe William urged the young people to vote responsibly at the forthcoming Presidential election by analyzing statements made by candidates and assessing whether they were true or false, justified and contributed to sustainable peace.

He pointed out that it was the youth who had fallen victim to political manipulations that had resulted in the JVP and LTTE uprisings. “We must make sure the experiences of the past are not repeated,” he said.

Before summarising the results of the survey, Dr Peiris pointed out that what Sri Lankan society lacked the most were leaders who could take decisions.

Some questions and views of the participants:

Some of the findings of the survey: