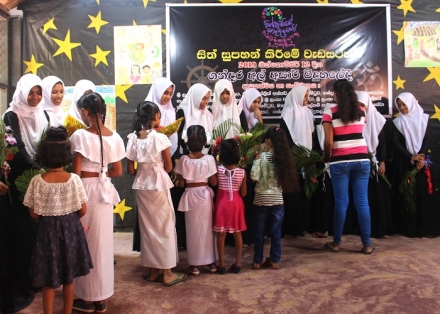 District Inter Religious Committee (DIRC) Matara, in collaboration with a number of Community Based Organizations, organized a visit to build solidarity among the Muslim and Sinhala villagers in the village of Gandara. The visit was facilitated by the NPC under its Actively Countering Extremism (ACE) project, funded by Canadian Fund for Local Initiatives (CLFI).

An art competition was held with the theme of peace and harmony. The children were divided into five groups and worked together regardless of different ethnicities, religions and languages to come up with a piece of artwork. The children presented their artwork and explained the concept behind it, showcasing positive reconciliation thoughts. In the evening, renowned musician Jayathilaka Bandara sang songs on peace and solidarity that has been evident throughout Sri Lanka’s history for more than 250 villagers.

The event had not been easy to organize. The DIRC had invited Buddhist monks from five temples to the event, which was to take place at the Al-Asar Muslim school, but monks from only one temple turned up. Other monks had chided the organizers for their choice of venue.

The build up of mistrust between the communities in the aftermath of the Easter Sunday attacks, and the election campaign which emphasized the importance of national security, would have contributed to this attitude. But the commitment of the civil society activists ensured that a large enough number of Sinhalese children joined the programme where they, together with Muslim children, drew pictures of ethnic harmony together. In doing so they got to know each other better, and so did their parents who had accompanied them.

The local groups involved who collaborated to make the event a success comprised a wide range of both state and civil society and included the Matara district branches of the National Youth Services Council, the Human Rights Commission, Sarvodaya, Transparency International, Gandara Fisheries Society, Gandara Police Station and Community Policing Unit, Matara DIRC and NPC. This showed the potential for peace building if the necessary leadership was given.