Spreading the Message of Unity 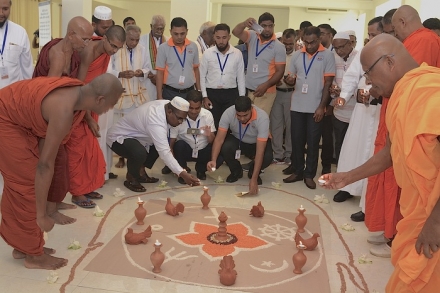 An exchange visit between Addalachenai and Weligama Local Inter Religious Committees (LIRCs) was organized by NPC under its project Collective Engagement for Religious Freedom (CERF).

On the way to Weligama, members of Addalachenai LIRC witnessed a Jumma prayer session at the Wellawaya grand mosque. The moulavi delivered a speech on the value of unity among religious communities and how activities such as the exchange helped to build harmony. A discussion between LIRC members and the mosque trustee committee members followed.

For lunch, they stopped at the Bodhiraja temple. The chief incumbent of the temple praised the organizers for realising the value of such activities. The evening refreshment was arranged at a mosque in Weligama where participants discussed its historical significance.

At the introductory session, Bishop of Galle Reverend Dr Raymond Wickremasinghe, praised the CERF project for its efforts to create peace among religious communities and for bringing together people from different parts of the country to share experiences with each other.

LIRC Committee members then shared some of the knowledge, skills, attitudes and experiences they had gathered through the years. Later they witnessed traditional Southern dance routines including one presented by the Elders Committee of Udumulla.

On the third day, LIRC members visited the Agrabodhi Rajamaha Viharaya in Weligama to witness the talents of Daham school children, where religious leaders emphasised the importance of young people working towards coexistence. They also went to a church in Weligama and the Kataragama kovil.

“We all bleed the same irrespective of what ethnicity or religion we belong to. Sri Lanka has a rich past where all religions have lived together in harmony. Recently there has been a rise in the majoritarian rhetoric fueled by the forthcoming polls. However, none of these people are true lovers of this country. As true lovers of this country we must act wisely and not heed the words of these power hungry politicians,” said Reverend Nalaka Quintus.