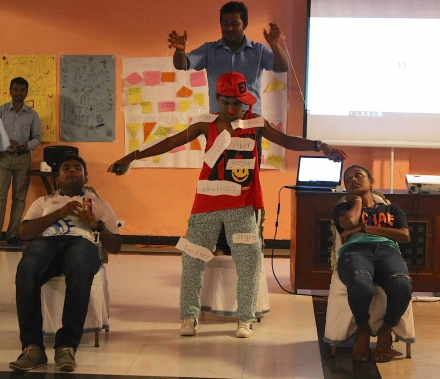 Over 540 students from 12 universities and another 400 grassroots level youth activists and leaders in 21 districts were trained on the Transitional Justice (TJ) process, enabling them to be active participants in the country’s reconciliation process under NPC’s two-year project, Youth engagement with Transitional Justice for Long-lasting peace in Sri Lanka, which concluded after two years.

The project intended to provide space for youth to understand and support the process of transition that Sri Lanka needs. The initiative succeeded in mobilising the energies and idealism of youth in a variety of innovative ways including trained students conducting awareness programmes for other students by organizing debates and theatre performances.

Another key focus of the project was to improve youth engagement in the transition process, and their evolution as internal mediators within their communities.

Young people's creativity was harnessed to bring in the different perspectives on TJ cutting across ethnic divides. This helped to reduce the susceptibility of youth to one-sided nationalist propaganda and activities that continue to impede the country’s post-war peace building and reconciliation efforts. The project evolved according to political situation in the country.

The project provided a range of training and mentoring opportunities, building young people’s capacity and confidence to engage in dialogue processes and to connect and consult with their peers and also with policy makers and to be internal mediators.

After taking part in knowledge and capacity enhancement workshops, the students conceptualised and conducted follow up activities in 21 districts, broadening the discourse on TJ and reconciliation among their peers.

A drama developed by students of the Eastern University was staged involving over 700 students who came from across Sri Lanka. Another major activity was the debate competition at Jaffna University, which was attended by over 2000 students who took part in the university’s art week programme.

“During the training process I understood that absence of war is not peace. I also learnt many creative ways to solve conflicts between communities,” said Ms Sirany Thevakumar, Secretary of the Batticaloa District Women's Federation.

“There are lots of conflicting narratives about TJ in our society. People in our district fault different groups for rights abuses, war crimes and victims’ situations. It's important to use our time and energy to develop a positive discourse by engaging with different groups and communities. In our discussions, we can explain to people about how the TJ processes in other countries also took a long time to resolve people’s issues,” said a Jaffna University student.