DIRCs Will Work With New Political Leadership to Promote Reconciliation 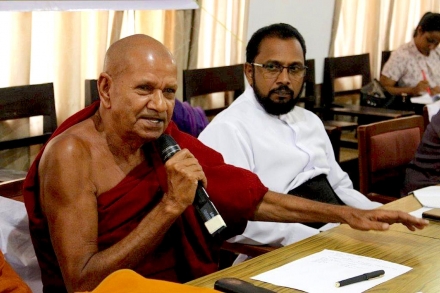 Held under NPC’s project Consolidating Ongoing Multi-level Partnership Actions for Conflict Transformation (COMPACT), the meeting was attended by 35 participants who expressed their views about the recent Presidential election and going forward with their work as peace builders.

A Puttalam DIRC member was worried about the army barriers that were going up in the north and east in increasing numbers, adding that it was causing a disturbance to the daily lives of the people. “People feel that military rule is happening,” he said.

A Buddhist monk from Kurunegala DIRC was of the view that NPC and civil society had tried hard to get their views across to people but that that they had not been able to change people’s views about democracy and reconciliation. Instead of listening to people’s views, they had put their own views forward, he said. He added that most people wanted to work with the government.

Another monk from Anuradhapura DIRC said that reconciliation should be encouraged because it was what was most needed at this time. He suggested working with the government and agreed to organize cooperation among Buddhist monks in the Anuradhapura district who supported reconciliation.

The participants agreed to take views of the meeting to their respective DIRCs to build a strategy for the future.