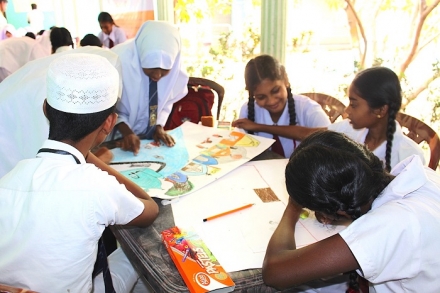 During the visit to Katugoda, a Muslim village in Galle, Mr Dickson Gamage, Police District Community Coordination Officer and Moulavi Ajmaal Naleemi spoke on the importance of building solidarity among communities in order to go forward as a strong, peaceful nation.

NPC Project Manager Saman Seneviratne and Mazziya Hillmy facilitated team games among the participants who consisted of government officers and youth. The games showcased the importance of working together as a team regardless of different ethnicities, religions and gender. Participants said that the various differences of their teammates were not relevant as they only worked towards the one goal of winning as a team.

One of the participants commented that she realised that it was possible to go forward more effectively working with the strength of the different communities than to advance alone with just one group of people.

In the evening musician Jayathilaka Bandara performed a collection of peace songs that highlighted the importance of living in harmony and coexisting with different cultures and communities.

The solidarity visit to Batticaloa was conducted in Kattankudy, home to Muslims and Tamils. The first session was an activity for the children where they took part in an art competition and drew paintings depicting people living in peace and harmony despite their ethnic and religious differences.

The visitors were invited into the Muslim homes to have tea while lunch was being prepared by local Muslim women, with the help of the visitors, who were mainly Tamils. They discussed their daily rituals and activities and the current political situation of the country. At the Methodist Church at Aarayampathi, several speeches were given regarding the importance of all communities living and working together to promote ethnic and religious harmony.