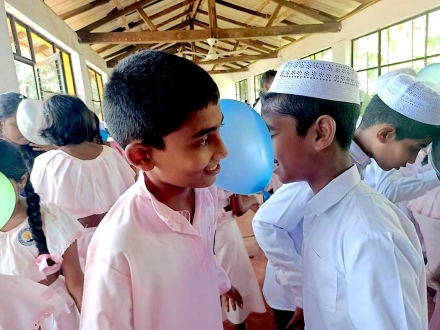 A solidarity visit was conducted to Horowpothana organized by Anuradhapura DIRC on the request of Ven. Yakaweva Jinarathana Thero, the Chief incumbent of the temple in the area. This was under NPC’s project ACE Actively Countering Extremism (ACE) funded by the Canada Fund for Local Initiatives (CFLI).

More than 80 Sinhala and Muslim people along with their children gathered in the temple. During the morning session the children were told about the importance of living in ethnic and religious harmony in order to develop a peaceful and developed country. Religious leaders shared their views and carried out an interactive session with the children and adults.

In the evening participants played various games and activities with each other, which enabled them to build trust and find new friendships with people from different communities.

One of the Sinhalese youth said that it was the first time he had had the opportunity to interact with Muslim people. He worked together with them as a team to win a game and this enabled him to understand them better and to realise that they were similar to him.

Another solidarity visit was organized by Puttalam DIRC in collaboration with civil society organizations and government institutions in Puttalam. About 800 people gathered for this visit including students from the Muslim Vidyalaya, the Palavi Sinhala Vidyala and Tamil children from the nearby village.

Thai Pongal was celebrated, so non-Hindus were able to witness the different Hindu rituals observed during Thai Pongal. A Kurukkal explained the importance of the festival and the reasons behind the rituals.

Many participants remarked that this was the first time they were interacting with people from other ethnicities and religions even though they lived in neighbouring villages. They commented that they had enjoyed playing solidarity building games, which allowed them to make new friends.

The visit ended with a musical session by musician Jayathilaka Bandara, who sang songs on the importance of living in ethnic and religious harmony, how it had benefitted Sri Lanka in the past and how it would do so in the future.