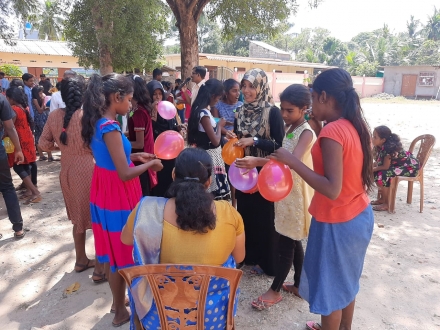 Two solidarity visits were conducted to Nuwara Eliya and Jaffna under the Actively Countering Extremism (ACE) project funded by the Canada Fund for Local Initiatives (CFLI) to promote religious and ethnic understanding and harmony.

The visit to Nuwara Eliya was organized by the District Inter Religious Committee (DIRC) in collaboration with civil society and government organizations.

At a Hindu kovil, participants engaged in various team building and trust building games, which enabled them to interact with people of different religions and ethnicities. Children from the Muslim, Sinhala and Tamil schools from nearby villages gathered at the kovil along with their families.

Most participants said it was the first time they had met and talked with someone who did not belong to their own religion and ethnicity.

The visit ended with a musical session by musician Jayathilaka Bandara, who sang songs on the importance of living in ethnic and religious harmony.

The second solidarity visit was organized by the Jaffna DIRC and other stakeholders and supported by the Community Policing Unit and the District Secretariat.

Songs and dances were performed to showcase different cultural aspects. Games to build team spirit and trust were held so that participants interacted with people from different ethnicities and religions.

Some participants explained that they had been skeptical about the visit and were even afraid to come because of the presence of other religious leaders and people from different communities but after getting to know each other, they realised that they were the same.

They were happy to get the chance to meet and interact with people from other communities and decided to continue the new friendships.