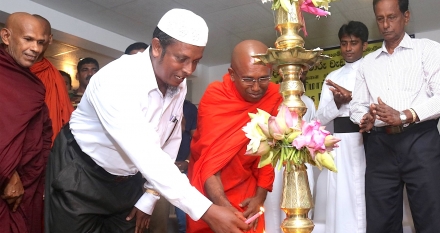 At the project orientation meeting to set up the Kuliyapitiya LIRC, participants emphasised the need to avoid racism and mentioned that extremist religious groups were trying to convert people, posing a threat to religious harmony and freedom in the area. They believed that the LIRC could seek solutions collectively for these issues to create a peaceful society.

At the orientation for the Panduwasnuwara LIRC, Buddhist, Catholic and Islam religious leaders explained the importance of maintaining long lasting peace among the different religious communities.

Also under the CERF project, a three day exchange visit was held between Mannar and Beruwala LIRCs to promote understanding and coexistence between different ethnic and religious communities.

On the way to Beruwala, Mannar LIRC members visited the Periyamulla grand mosque for Jumma prayer and a sermon on Islamic teachings on unity and reconciliation.

“The word coexistence has been in the Sinhalese vocabulary for a long time but it was not used often. This was because coexistence was already there in our society. Now we use this word often because true coexistence is not evident in our country. We must work together to change this,” the Head Moulavi said.

Maithree Moorthi Thero pointed out that there had been many initiatives in Beruwala similar to the LIRC but none had made the same impact. “This is due to the commitment of the committee members and the organizers,” he said.

Divisional Secretary of Beruwala, Chathura Malraj, commended the work of the Beruwela LIRC saying it had promoted the idea of an united Sri Lanka. “I hope the LIRC will continue the good work it has been doing in the future,” he said.