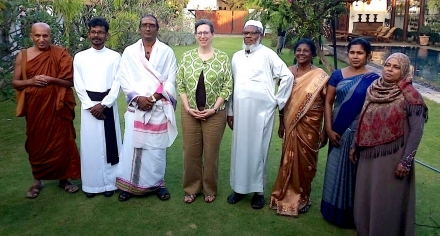 Canadian High Commissioner David Mckinnon and US Ambassador Alaina Teplitz paid separate visits to the Matara District Inter Religious Committee (DIRC) and the Puttalam DIRC to learn about their work.

Mr. Mckinnon, whose country funds the Actively Countering Extremism project, was interested to knowing about the peace building activities of the DIRC and asked about the social and economic situation in Matara, especially after the Easter Sunday attacks.

Matara was the first district to hold a meeting with relevant stakeholders to identify issues that originated as a result of the attacks in 2019. A committee was appointed to organize a solidarity visit to a Muslim village in the district to ease the fear and mistrust that arose. DIRC members spoke of the many challenges they had faced and overcome to make the solidarity visit a success.

Ms. Teplitz visited Puttalam DIRC where the group spoke about their efforts to improve peace and harmony in the area. She commended their work and remarked on the close relationship the DIRC had with the community and other stakeholders such as government officials, which had helped to uphold peace in the district.

DIRC members told Ms Teplitz that an Office on Missing Persons had not been established in the district and that war displaced people were unable to receive compensation because they were not registered.

Ms. Teplitz said that it was important to educate people about the Right to Information Act and basic human rights in order to protect democracy. She pledged to help the peace building process with the collaboration of NPC and its partner organizations.