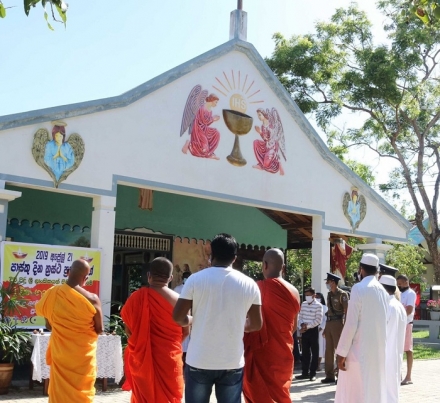 Buddhist, Muslim and Catholic religious leaders of Weligama LIRC, Bishop of Galle Rt. Rev. Raymond Wickramasinghe, police officers and civil society leaders attended in a candle vigil to commemorate those who had died and were injured in the bombings.

Rev. Charles Hewawasam, a member of Weligama LIRC, conducted the event at the Shrine of Christ the Healer in Weligama.

Divisional Secretary, Mr. Sumith Shantha, who attended the event said they had planned a ceremony but had been unable to do it because of the Covid-19 crisis that limited public gatherings.

“It is great that we are united amid these difficulties. We are in solidarity with those who died and were injured in the Easter Sunday attacks and pray for justice for the victims,” he said.

Moulavis of the Negombo Grand Mosque and DIRC members, Mohomed Salman, Mohomed Abdulla and Ismail Haris said that Muslims had decided to remember the bombing victims by donating dry rations to the St. Joseph Elders’ Home, which is run by Catholic nuns.

They also donated 100 packs of rations to the church in Katuwapitiya to be distributed to the needy in the village who had been affected by the attack in remembrance of those who had died in the bombings.